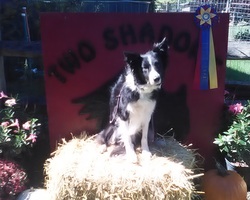 2016 At the NESA herding trial at Two Shadows Farm in New Braintree MA on 5/27, Lex took 2nd place in Adv Ducks A course for 3 points.  And on 9/24 at the Berkshire Belgian Tervuren Club, also at Two Shadows Farm, he finished his Herding Championship with a 4 point major and High in Trial.
​On November 5th he finally finished hs WCR Level 3 Rally Title with a 2nd pl.
​
Lex has been too busy to lists his accomplishments.  In his winter past-time he finish CDSP-CDX title with all 1st placements.  Then he ventured into the world of WCR Rally Finishing his Level 1 and Level 2 titles with an Award of Excellence.
2015 - The snow finally melted, it stopped raining and we were able to get out and do some herding and are slowly progressing towards our Herding Championship title with nine points.  On July 18th at the Raspberry Ridge herding trial, he picked up a Reserve High in Trial to Terra's High in Trial and finished his Master Advanced Duck A title.

WOO HOO!  In Open Class competition, Lex started out in the first round finishing up in 1st place.    He stayed strong and focused and when all was done on Sunday afternoon, Lex finished up in 3rd place, loosing a run-off for 2nd place but 1 point off from 1st place.   On July 14th, 2012 at the ATBA AKC herding trial in Bangor, PA, Lex got is 1st Q with a 1st place in Advanced A ducks. March 9 & 10, 2012 at the Monticello NY Kennel Club, Lex finished his AKC-CDX title with a 1st and 2nd pl and scores of  196 and 194.5.  His scores have qulified him for the AllStar Obedience Championships in York PA on Aug 4th & 5th.

December 11, 2011 found Lex in the obedience ring, working towards his CDX title.  He earned hers first CDX leg with a 3rd place and a score of 195.5. September 2 & 3, 2011, was a very busy weekend at the Northeast Stockdog Assoc AKC herding trials in Lebanon CT, still feeling the affects of Hurricane Irene..  Lex ran in Started A course sheep both days and Q'd to finish his title with a 2nd pl and a 3rd pl.  He also ran in Intermediate A course ducks to finish that title.  He completed his HIA title with all 1st places.  August 27, 2011 at the Susque-Nango KC AKC Agility Trial, Lex ran in his first agility trial, taking 2nd pl in Novice Jumpers. June 4 & 5, 2011 at the Susque-Nango Kennel Club AKC Herding Trial, Lex came out in Started A Course Sheep eaning his first Q and a 3rd pl.  He also earned his first Q and a 1st pl. in Intermediate Ducks. LEX HAD QUITE A WEEK AT THE BORDER COLLIE SOCIETY OF AMERICA NATIONAL SPECIALTY!! in Gray Summit, MO at Purina Farms Farms, Oct. 18-24, 2010. He qualified in Herding Started A ducks to finish his title with placements all 3 days.  Then he entered the Novice obedience ring to finish his CD title with a 2nd place!!!!   On May 8th 2010, Lex took 2nd place in his very first AKC herding trial at the SNKC trial in Started A ducks.  The next day (Mother's Day) he went High in Trial.  That's my boy!! 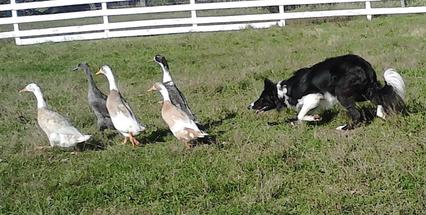